My brilliant fellow Grady grad, Felicia Harris, recently wrote a wonderful post about her academic journey, and she’s inspired me (and I’ve finally given myself permission) to do the same.

A year ago at this time, I was in my final days of working as a bus operator/trainer for UGA’s Campus Transit System and working as a PR intern for the Georgia Museum of Art. I had a plan – I was entering my final year of my Master’s program in Mass Media Studies, and I was going to move to Atlanta when I graduated to practice PR. I knew I wanted a Ph.D., but I thought that was still several years away.

But as that Fall semester began, other things began to chip away at that plan. After working on a conference paper with my adviser, the wonderful Elli Lester Roushanzamir, and taking a class that introduced me to WJT Mitchell and image theory, I knew my plans had changed. Then, one week in January 2015 confirmed that – I had been accepted in the PhD program at the Grady College of Journalism and Mass Communication, and that conference paper had been accepted for presentation at the 2015 International Communication Association Conference in San Juan, Puerto Rico.

That spring semester flew by. I wrote, edited, edited, edited some more, and then finally successfully defended my master’s thesis (with the help of my brilliant committee, Elli Lester Roushanzamir, Carolina Acosta-Alzuru, and Valerie Boyd). I came to learn myself just as I came to learn the theories of dramaturgy, digital literacy, and the social media phenomenon I dub “identity bending.” I got a tattoo as my present for these accomplishments. The quote “love the questions themselves” is forever marked on my left wrist as a reminder to the excitement I felt that week in January (those words are from Rainer Rilke’s “Letters to a Young Poet” – be still with all that’s unresolved in your heart, and learn to love the questions themselves).

And then, I was off to Puerto Rico. I had never traveled alone, flown alone, booked a hotel alone, hailed a cab, etc. etc. I didn’t just step out of my comfort zone. I zoomed out of it, 500 mph across on ocean on a Boeing 757.

There, I presented original research entitled “Fear and Selfie-Loathing in America: Intersections of Image Theory, Feminist Theory, and Arm’s Length Self-Portraits,” and was awarded Top Student Paper, Popular Communication Division. I had the privilege to speak on a panel entitled Theorizing Digital Media’s Visual Imagery: Aesthetics, Abilities, and Motivations with brilliant scholars from Brigham Young, Annenberg Pennsylvania, the Queensland University of Technology, and Hebrew University-Jerusalem.

In August, I begin my PhD at the University of Georgia’s Grady College of Journalism and Mass Communication, as well as my journey into my becoming a “Triple Dawg” (I’ve earned a Bachelors and a Masters from UGA). Broadly, I call myself a digital imagery scholar, as I’m fascinated by things such as selfies and memes. The paper I’m currently working on to submit to a conference early next year is about Slender Man and the feminization of digital spaces. After that, I already know another selfie paper is in the works. Memes and selfies have already evolved and changed so much just in the year since I began researching them, which makes it such an intriguing field. 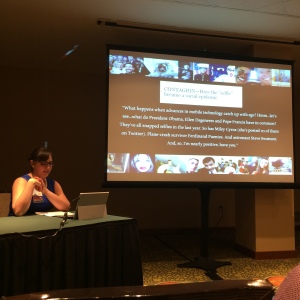 The way we visually represent society says so much about ideological norms and values. Images are never innocent, and they are never silent. They are screaming a thousand things, demanding to be studied, looked at, revered. They sit amidst a rocky terrain of gender, race, class, politics, religion, history, popular culture, and current events, not just in their content, but in their production.

Those who know me know that I view the academic and the personal as inextricably linked. As I came to learn theories, I came to learn myself. James Carey pushed me into the swimming pool. Stuart Hall encouraged me to think boldly. W.J.T. Mitchell showed me the world. bell hooks inspired me to roar.

I used to never believe I could be here. This was one of the best things I ever gave myself permission to do.

Talk Derrida to Me

Ramblings in 140 Characters or Less